The exhibition is on view at the CMU Miller Gallery until Saturday 5/20. The gallery is open from 12 to 5 Tuesdays – Fridays. 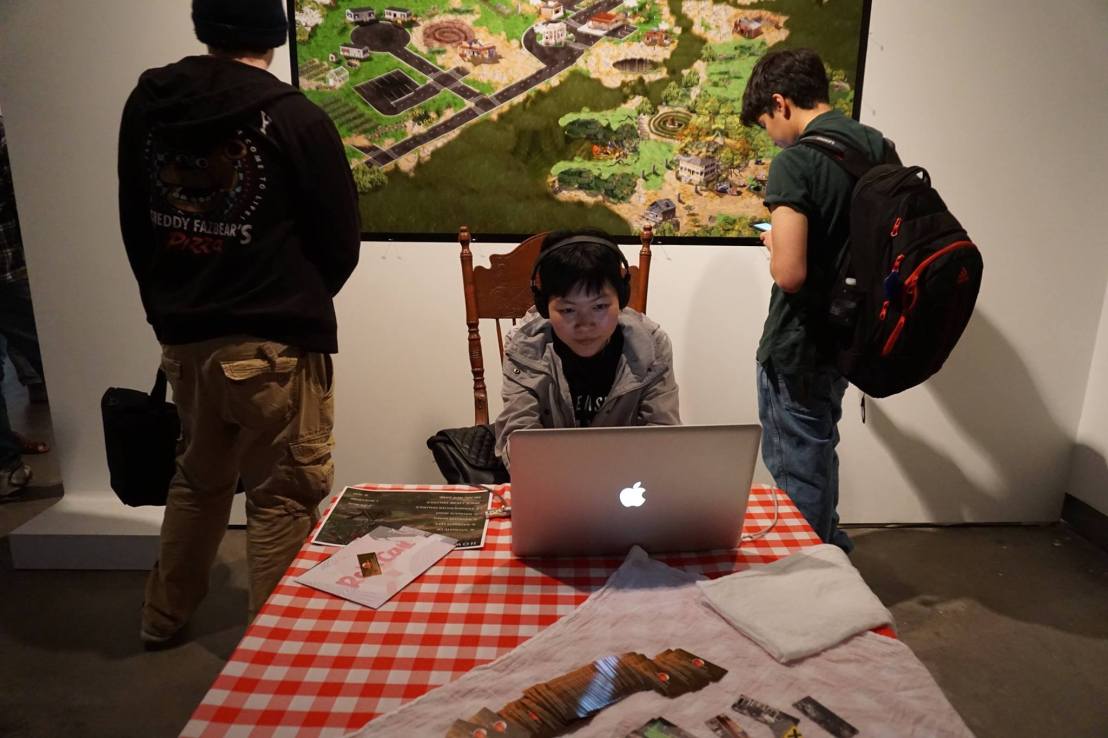 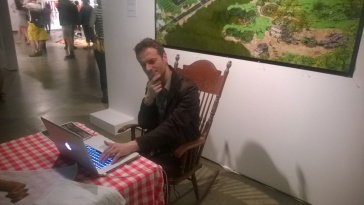 I recently implemented a system that lets the player choose which quest they would like to be active. This changes the location of the quest tracker, the highlighted reminder summary in the journal, and internally quiets other quests. While making this system I ended up making a few design decisions I didn’t think I’d have to at this point:

Featuring the quest pointer on the minimap!

I added a minimap to aid navigation. Next step is to implement a quest tracker (which I will do along with the quest stacking system.) I also added a lapping waves animation and ripples from the feet when the PC walks over the river. And I implemented a layering system, which is still bugging, that detects what layer objects should render to in relation to the player. 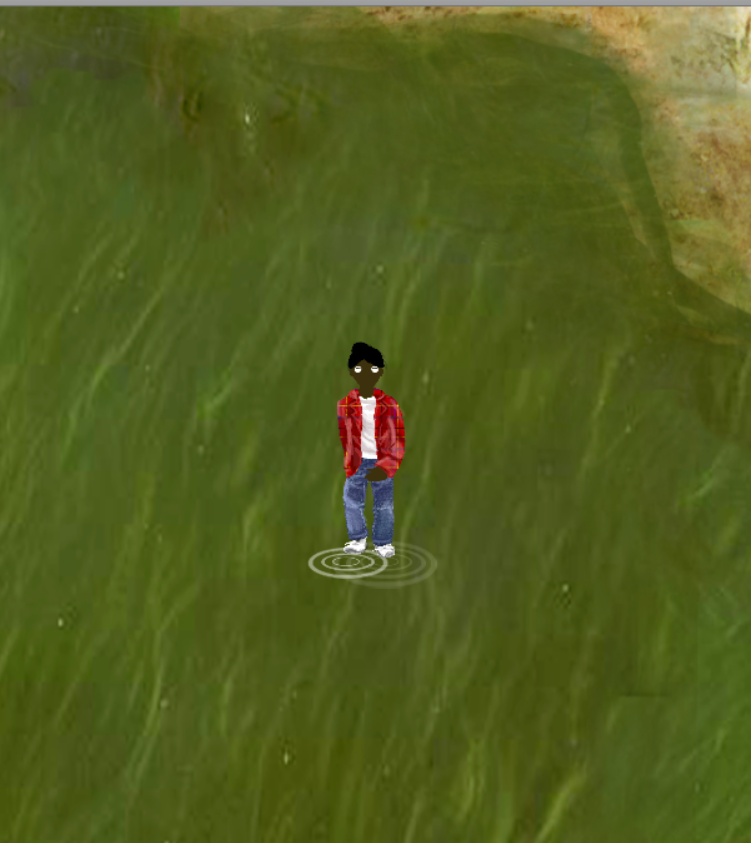 After having a few more playtests with non-gaming audiences, I found two major design issues with the game’s current iteration: losing navigation (which I will address in a later post) and understanding when events happen in the game. To address the latter, I’ve added quest notification and stolen “X will remember this” from Tell Tale Games games. These feedback mechanisms are vital to players understand and manipulating their place in the game.

Quest Notifications: The name of the quest will appear after leaving the trigger area of the quest giver. The same occurs when a quest ends. I decided to use this convention of games, which I thought would disrupt the experience of a non-gamer, to communicate entry into a deeper narrative. Later I will also pair this with stackable quest reminders in the journal, though I haven’t implemented this yet. I want the player to remember what they are doing and why, an issue that is compounded by my audience of traditionally non-gamers. I’m learning that I need to be very upfront about most things I taken for granted as a player literate in this genre.

Dialogue Choice Notification: This occurs next to the dialogue box of a character when the player makes a choice that the NPC likes or doesn’t like. The exact reaction is shown in the facial expressions. I placed the notification next to the face because playtesters did not notice the changing facial expression on their own. My intuition says this will become annoying quickly, but the trust system must be made very clear to the player as it how they manipulate the narrative. I will also pair this with a new line in the tutorial warning the player that “people in Centreville hold grudges and remember deeds. They are sometimes hard to sway.”

When I first made the quest system for Devil’s Diction, I made it so that all quests were a series of linked dialogue scenes. I did this to make character interaction the driving progressive force for the player (as opposed to combat, items, or exploration.) I quickly ran into problems with this narratively, as the core conflict of the first half of the game is “finding the missing gun.” This object is impossible if the character has no inventory or way to interact with object in the world. At first I thought adding an inventory as a place for the PC’s own fear object would be fine. Inventories are RPG convention, after all. The player can interact with objects by selecting them, which give them a short description. I used this to deepen character understanding by examining the objects in a NPC’s vicinity. And then I wrote some quests that required the player to pick up objects and bring them back. And I arrived at fetch quests.

Granted, these quests are not “go get the [item].” The objects the player retrieves are not placeholders–they have narrative significance. There are also instances of “go get a thing”, instead of “go get the thing”. These items are a choice the player makes. FOr example: Phantasma needs Barnett’s DNA for a potion. Any DNA will work, but she wants Barnett’s. The player can collect DNA from any human NPC and bring it back. I felt better about this kind of fetch quest than its traditional counterpart.

Why are these quests so reviled? They are a cliche, and they don’t make narrative sense (sometimes). Why can’t you hunt 10 bear pelts on your own Temba Wide-Arms? I’m a stranger to you, why would you put this must trust in my random ass to go get your royal mcguffin? These questions don’t make the quest any less fun, but they do illustrate a discrepancy between opportunities for interaction (usually combat) and narrative cohesion. Luckily (?) Devil’s Diction has no combat, so why did I default to fetch quests? Have I played too many RPGs? As I wrestle with this issue I feel like I am being either very lazy and copying existing quests or I’m stretching my logic to justify writing those quests (i.e: Finch is distrusting and needy, so fetching his booze for him opens him up/slash makes the player an enabler. That feels like an excuse.)

Right now my answer is to change the fetchiest quests by infusing them with player choice. Make the quest remember nearly every choice in the quest and repeat them back to the player (i.e: You tell a joke to a ghost and the joke appears in the forward of Bloodybone’s nook, a quest item later) . Or make it so that narratively, the PC is the only person willing to do the job (in this context, I think it’s pointless trying to incapacitate a character and claim they can do it themselves, they just don’t want to.) Because in the end, the fetch quest does bolster exploration in the world. Exploration without reward (towards a goal or through spectacle) is boring, but exploration for a quest inherently has a goal. Ultimately I think that is the best facet of fetch quests, and why I will keep mine (for now.) The characters in Devil’s Diction have relationships prior to the player’s arrival to Centreville. These relationships remain constant over the game, with the player only being able to directly influence the relationships at stake in the foil quests. The players choices in these quests affects the NPC’s trust levels, which determine the ending of the game, and the trust levels of their friends and enemies. This systems works by giving the NPC that is most effected positively by the choice (the person the player is talking to in the dialogue or the NPCs of the foil quest they are on) 2 trust points. The friends of that player gain one trust point, and their enemies lose one trust point. This system allows a player to tangentially better or worsen their reputation with a character if they regret an earlier choice. Since there are less enemy relationships, when a choice effects an NPC negatively, it does -3 points to that NPC’s trust. Trust cannot be negative and does not cap. 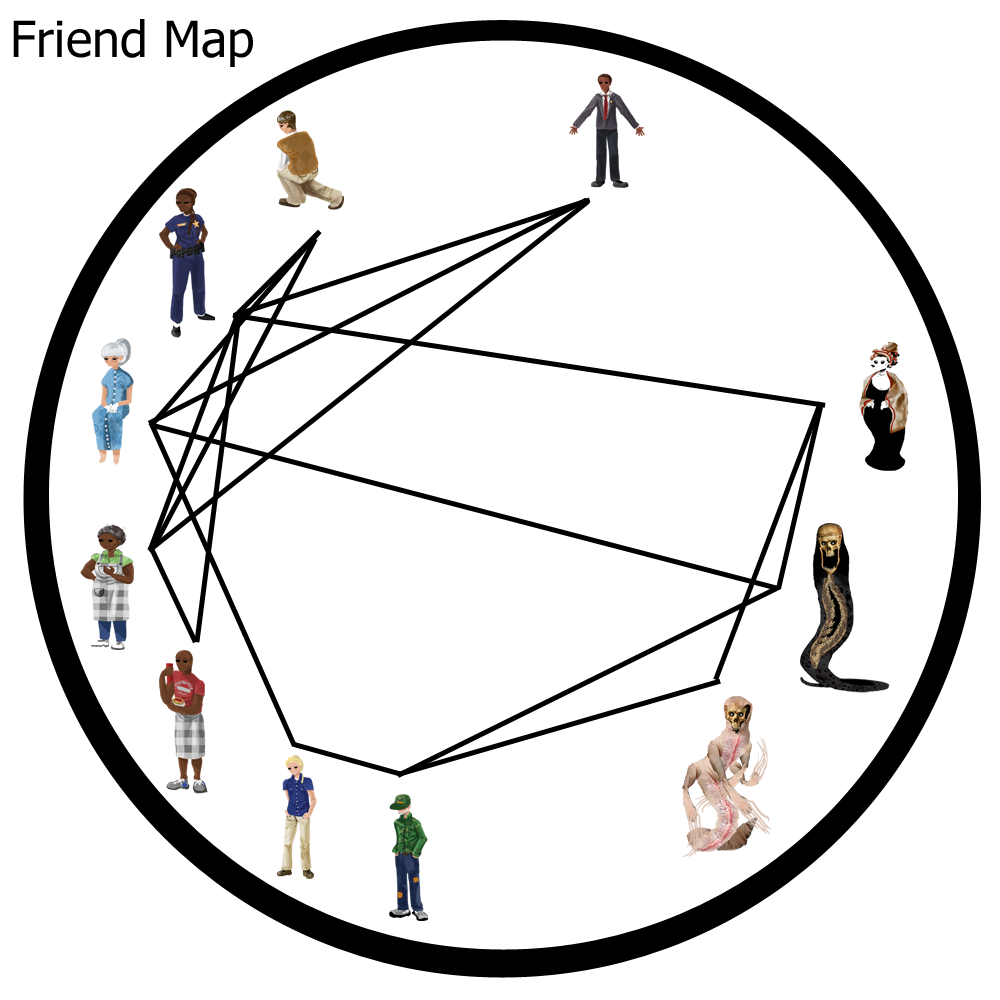 A new video showing some recent bug fixes, fixes to the animation, and the new selector for dialogues.