I’ve added more textures, and I did a quick lighting pass. I like the orange and purple tones that warm and cool different areas. I’ve started texturing the environment kit. The high poly bakes are mine, but the stones and wood base textures are from substance share. I’ve added low poly versions of clutter and hero assets. I’m going for a desolate, hard, stony vibe for the castle, so I went for harsher edges and sturdier construction. I want the player to feel small and ephemeral (while using fire to really emphasize their own path through the space), so I distorted the scale of the objects a little.

Next steps are to optimize and texture. 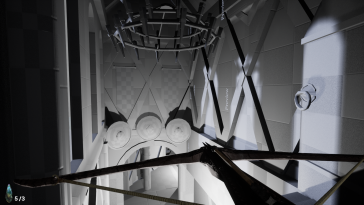 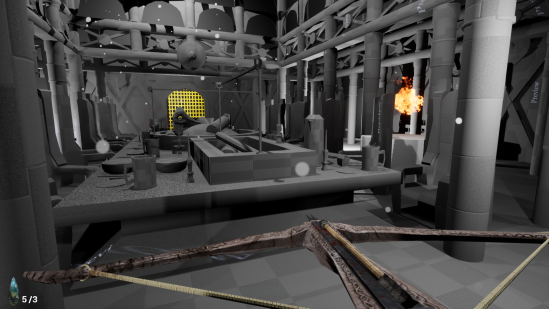 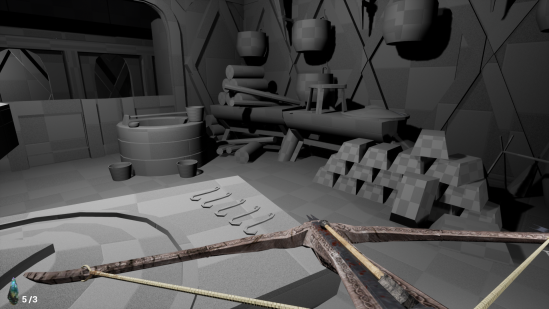 I did another pass on the level to add rougher, less regular areas to add to the mish-mashed feeling of a castle built into a mountain. This was in response to feedback that the level felt like too much of the same. I also added the block in the upper bedroom back, forcing the player to go up through the tower.

My next steps are to reexport the architecture geometry at the correct texel density and do a final pass to make sure everything snaps together neatly.

I went through and cut/merged several redundant spaces include the third large hall, which didn’t really have a purpose besides looking cool. I merged it with the hall that has the fire puzzle.

I also converted the underground passage into a tower. I thought this was a more interesting structure to traverse because it’s highly visible from the outside (but the entrance is hidden.) Switching to the tower also removed a lot of  extra hall space in the upper complex and added another layer of verticality. I mirrored the tower in the servant’s area corridor to foreshadow to larger tower later.

I was able to get rid of the strange double hallway at the bottom of the previous level, which felt forced. There are now two 1 sided doors in the level to gate keep the player on the critical path. Hopefully I can think of s routing solution that’s more elegant.

I also need to do another pass on the servant’s areas to make them less uniform again.